My name is Jean-Paul Suijs, PA9X. I was born in 1972 in the city of ‘s-Hertogenbosch, in the province of Noord Brabant, about 80 km east of my current QTH. My current QTH is the small town of Vlaardingen (locator grid JO21ev), between port city Rotterdam and the North Sea coast. Vlaardingen is known for having harbored the largest herring fishing fleet in the world.

I have been busy with radio since I was only just a two year old little toddler. At that time, my father owned a Philips AM/FM and shortwave receiver. An analogue one, with big and shiny futuristic aluminium tuning knobs. I discovered when turning this tuning knob, something special happened.

From CB to HAM

CB was legalized in The Netherlands in 1980 on 27MHz. My dad bought got us a permit and a 22 channel 0.5W FM radio with a futuristic looking tall vertical antenna with radials on the roof. At the age of 8, I was intrigued by the fact that making radio contact was so easy. But even more intrigued by those foreign voices, which my mum explained as CB’ing Italian and Spanish truckers from the nearby highway (which it wasn’t, it was real DX!). But unfortunately, local CB became more of a swearing competition. A few years later both radio and antenna were sold.

In 1988 a neighbour was cleaning up his attic and found two CB base radios that he gave to me and my eldest brother. We bought a DV27 mobile whip, and mounted it next to the window. Unfortunately both radios had blown up end stages, but we could still listen local QSO’s. After a month or so, we wanted more, we wanted to transmit! My eldest brother and I went to the annual radio flee market. We both bought a used 40 channel 4 Watt FM CB radio. He put his one in his car, and I hooked mine up to a mobile whip near the bedroom window. Unhappy with its range, the mobile whip was soon replaced with a GPA27 base antenna on the roof.

I discovered DX’ing, when I made my first QSO with a Croatian station on a summer evening. That was my start for learning more. Soon a new modern CB radio with SSB, the Ranger RCI-2950, shortwave receiver Yaesu FGR-7700, longwire antenna for listening and a directional antenna for transmitting completed my station.

When my wife and I bought an apartment in the year 2000, it was not suitable to continue my hobby and sold some of the equipment. But when we moved to a bigger house in 2003, the radio fever returned. I bought a used Kenwood TS-440 transceiver, put up a decent 5/8 wave vertical antenna and started DX’ing again.

The limitations of 27MHz made me study for the Novice class amateur radio registration. I passed the exam in 2008, became a registered radio amateur and discovered a new world on HF with my callsign PD1JP.  HF propagation was always my biggest interest. I started to build my own antennas, preferable from scrap and ‘unusual’ materials.

The Novice class registration limited my operations to 25W PEP on 70cm, 2m, 10m, a part of the 20m and the 40m band. After 4 years on these bands, it was time to move up to the Full class registration which gives access to all bands, up to 400W PEP. After five months of study with a good teacher, PA3S Steef, I passed the exam in March 2012, and registered my current callsign PA9X. 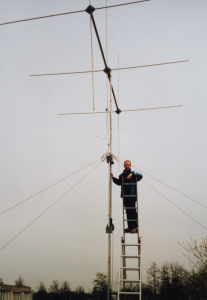 I love DX. My favorite band is 10m, however I am also active on other HF bands. In the summer 6m attracts most of my attention. In years of less solar activity, I move to 60m band.

My main mode is SSB. But when 10m is open, I always like to move up and do AM or FM. I am also active with FT8, PSK and RTTY. When I am not listening, I am doing WSPR on all HF bands and 6m.

Propagation intrigues me. I have learned a lot about it and am able to predict propagation for 10m, which gives me an advantage when DX’ ing. I spent a lot of time analyzing WSPR data, Rx data from NCDXF beacon monitoring stations and finding correlations with space weather.

Many amateurs build their own electronics. I am more of a mechanical guy (I have a college degree in mechanical engineering). Building antennas is what I like. Preferably from scrap metal, some wood, used plastics and other materials that you would usually put in the garbage collector.

I met my wife in 1998, and we got married in 2007. Our son was born in 2002, he is a musician composing in his style of progressive rock and metal music. Our daughter was born in 2005. She is a caring and creative girl who makes inspiring drawings, paintings and writes novels and comics.

From mechanical engineer to marketeer

I studied to become a mechanical engineer. I used to work as an engineer, got into sales, then got into marketing. My job is Principal Marketeer at Imbema, responsible for all marketing activities.

VERON is the Association for Experimental Radio Research in The Netherlands. I was member of the VERON Central Board (HQ) from 2014 to 2017. Also chairman of the VERON Public Relations Commission, supervising the VERON ICT Team and chief editor for the VERON main website and social media channels. I am still active as an author for the VERON website and Electron magazine.